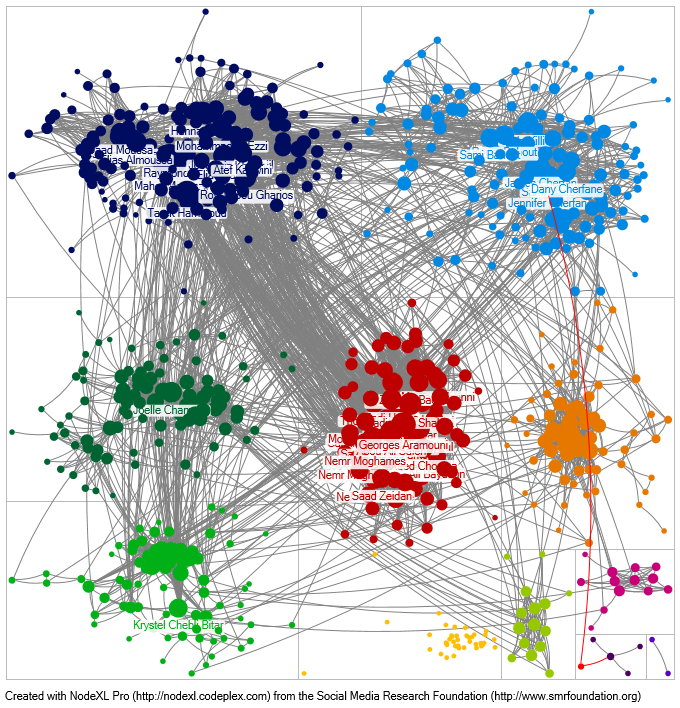 LostCircles (https://lostcircles.com/) uses a proprietary format that NodeXL fails to open and use.

Below is a workaround for this problem and a step by step approach to charting your Facebook network of friends:

Bridges (edges) and bridging nodes (vertices) in a network are essential in connecting cliques, moderating the debate and introducing new ideas and innovations and filling structural holes in a network (ref. Ronald S. Burt).

When you separate vertices in groups in NodeXL (figure), several columns are added to your “edges” sheet, mainly “Vertex 1 Group” and “Vertex 2 Group” 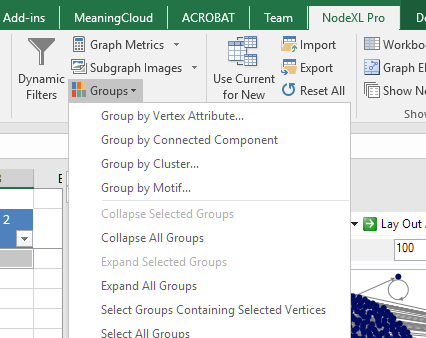 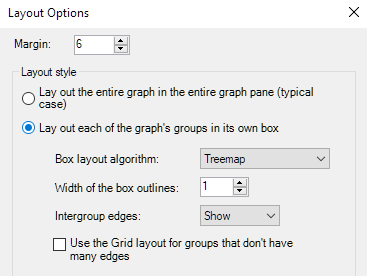 return a graph where nodes/vertices are separated into groups, each painted in a different color: 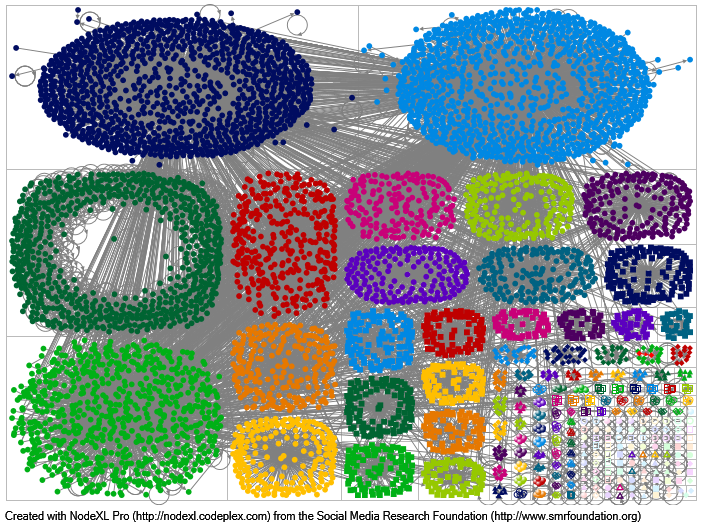 Finding edges with high centrality or degree is straightforward in NodeXL but, what if you wanted to find the bridges between groups? people who are transporting/propagating the debate/discussion from one clique to the other?

First, we need to determine the bridging edges between groups:

If you refresh the graph now, it should look like this: 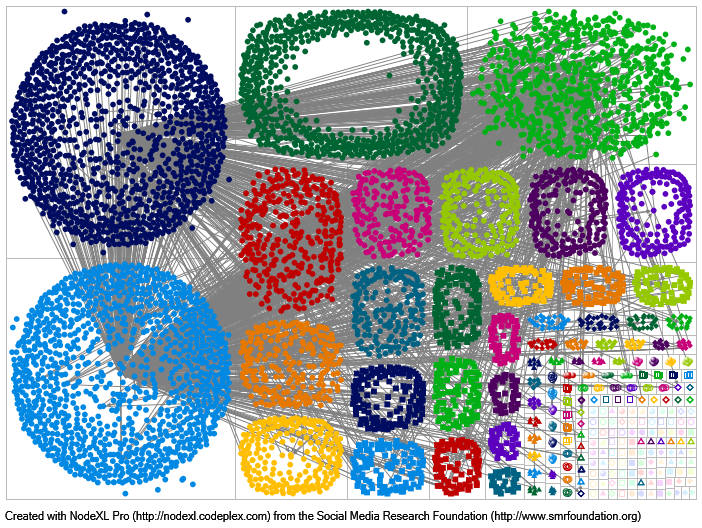 A value of zero means that the vertex is not a bridging node. The higher the value, the higher the number of connections of this vertex to people outside its group or circle of friends: 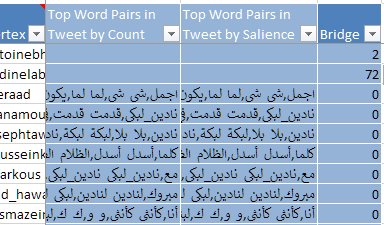 The last step is to hide the non-bridging vertices. In the Visibility column of the vertices sheet, type the following formula: =IF([@Bridge]=0,”Hide”,”Show”)

You can also use “Skip” instead of “Hide” to exclude the non-bridging vertices from future calculations (need recalculation).

To display the names of the vertices, in the “Label” column, type =[@Vertex]

In the image below, for aesthetic purposes, I hid all the bridging nodes that have less than ten connections with other groups (=IF([@Bridge]<10,”Hide”,”Show”) in the Visibility column of the vertices sheet instead of =IF([@Bridge]=0,”Hide”,”Show”): 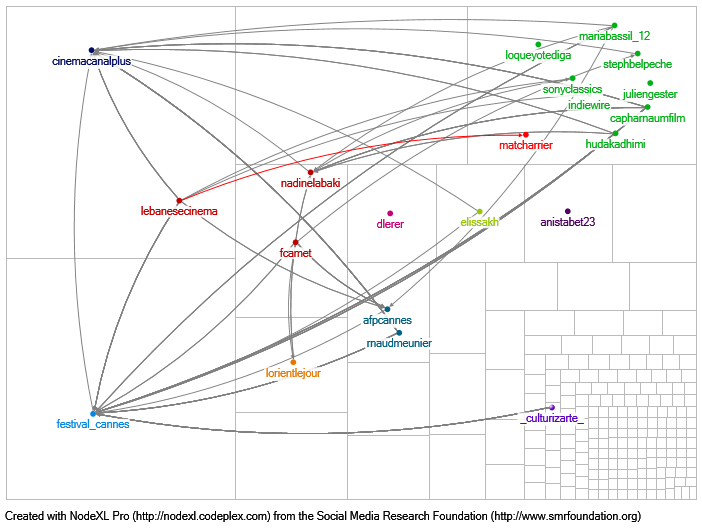 In a glimpse, we can now see that “canal plus”, “cannes festival”, “nadine labaki”, “sony classics”, etc., have helped disseminate the information to ten groups or more.

The sheet used for this post can be downloaded here. 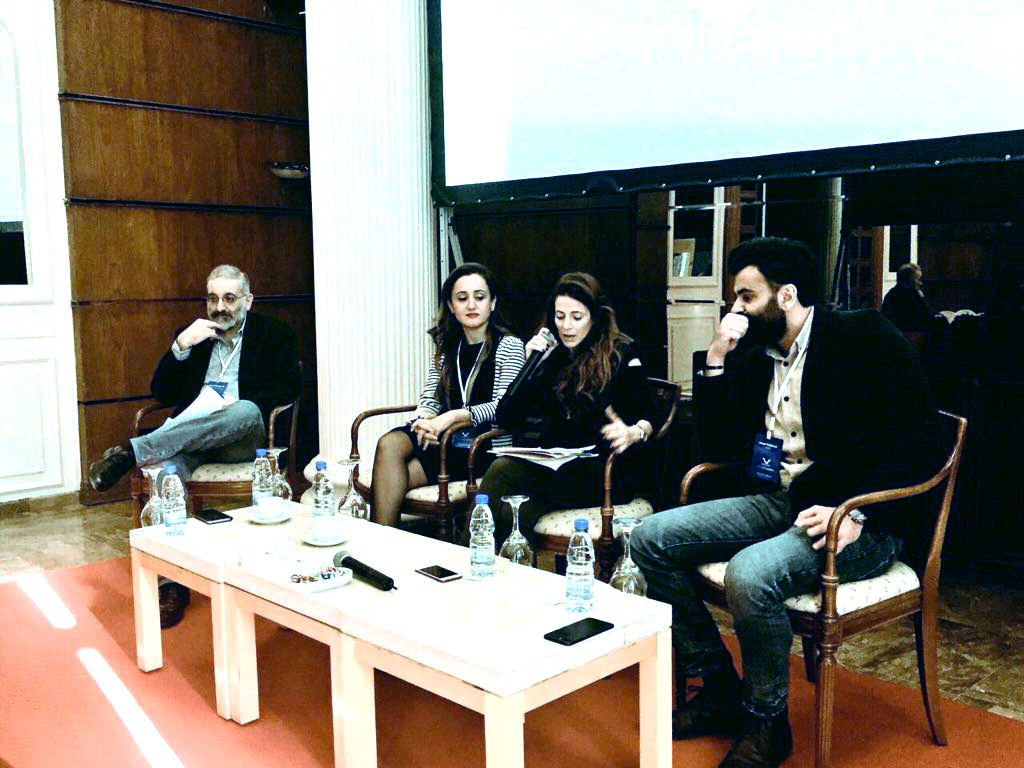 My presentation “From Smart Mobs to Smart Govs*” in the Tech4PoliticalChange panel at the Tech4Freedom conference that took place at the Riviera Hotel in Beirut, Lebanon, on Thursday 14 and Friday 15 of December 2017.

*Smarts Govs is a term I have invented to describe governments, dictators, political establishment and political actors who learned how to use digital tools to their advantage, shifting power back to its original position.

From smart mobs to smart govs from Nasri Messarra 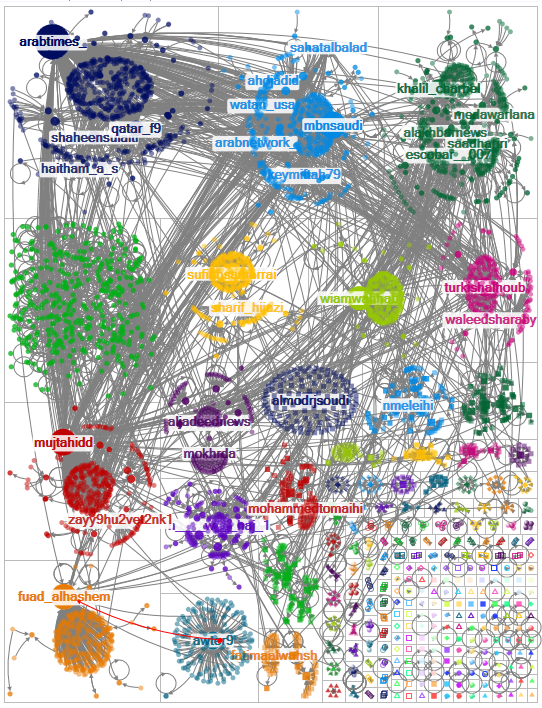 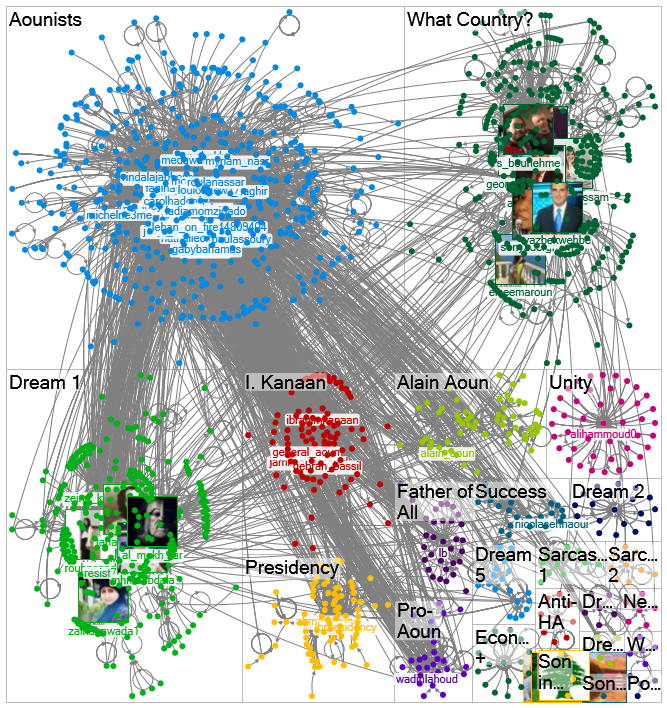 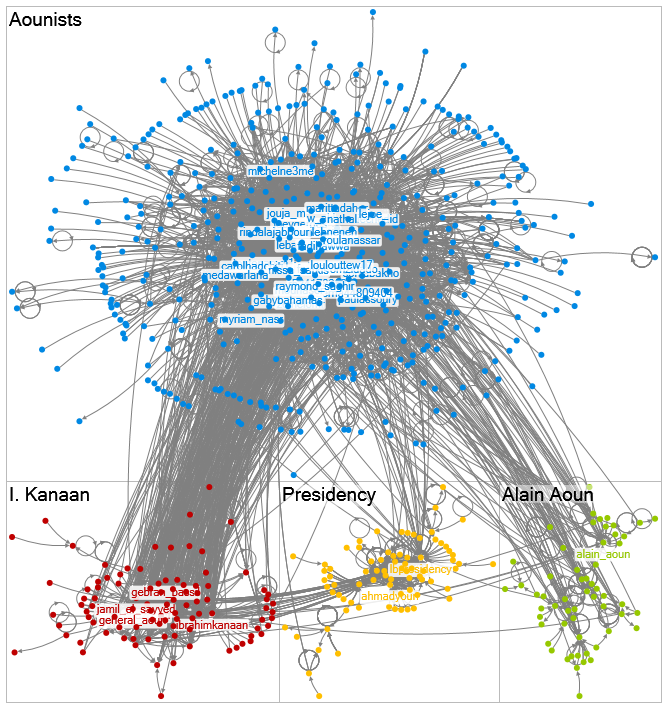 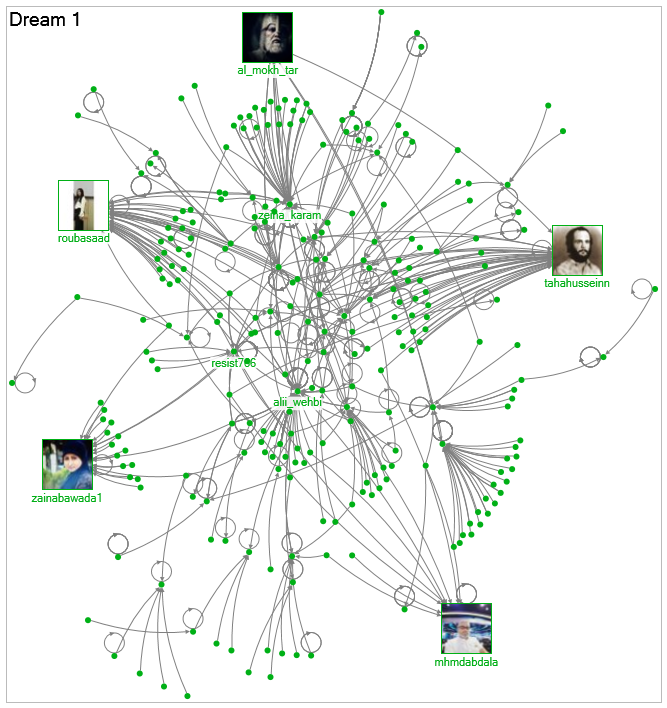 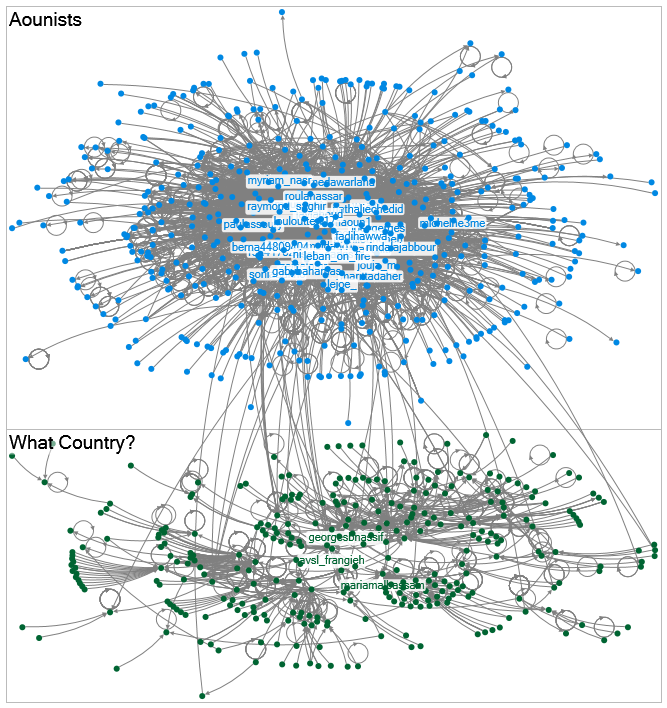 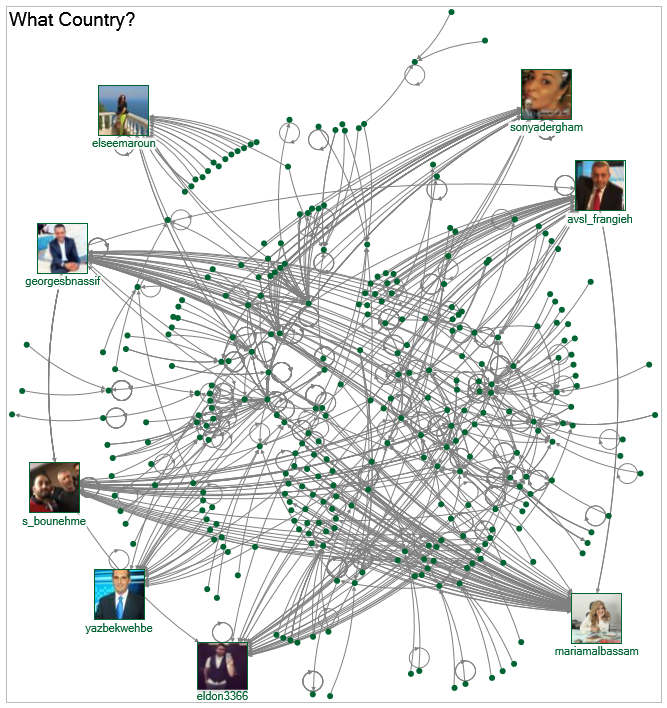 I would like to thank all my guests, Mr. Rachad Saddi (EMEA Channel Partner Manager, Global Partnerships at Google), Mrs. Michèle Khalifé (Head of Marketing and Communication at Total Liban),  Mrs. Rita Hayek (Actress), Mr. George Khalaf (YouTuber and Film Director) for joining in and sharing their experience with my students.

Special thanks to Marc Smith and Arber Ceni for their support with NodeXL and for making sure we have the best experience in mapping Twitter and Facebook discussions. 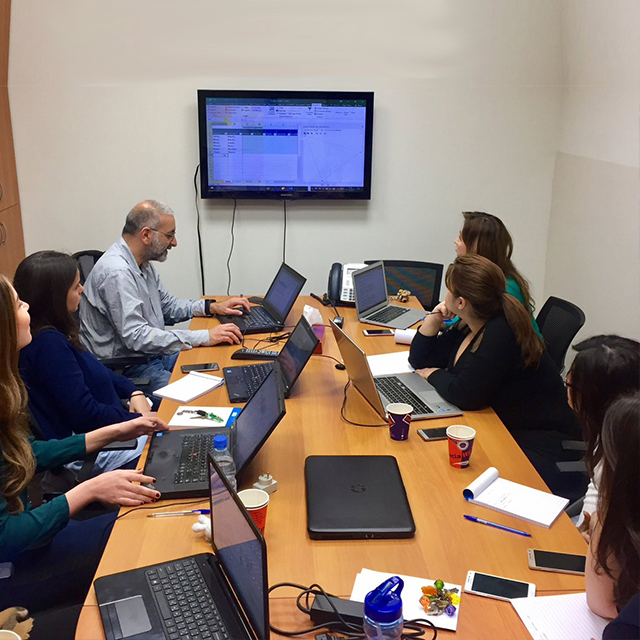 Third training session about Twitter discussion analysis at the Knowledge to Policy (#K2Pcenter) Center of the American University of Beirut. Social Graph visualization using NodeXL. Thanks for all those who joined the #k2pworkshop discussion.

Top retweeters of Wiam Wahhab by number of followers 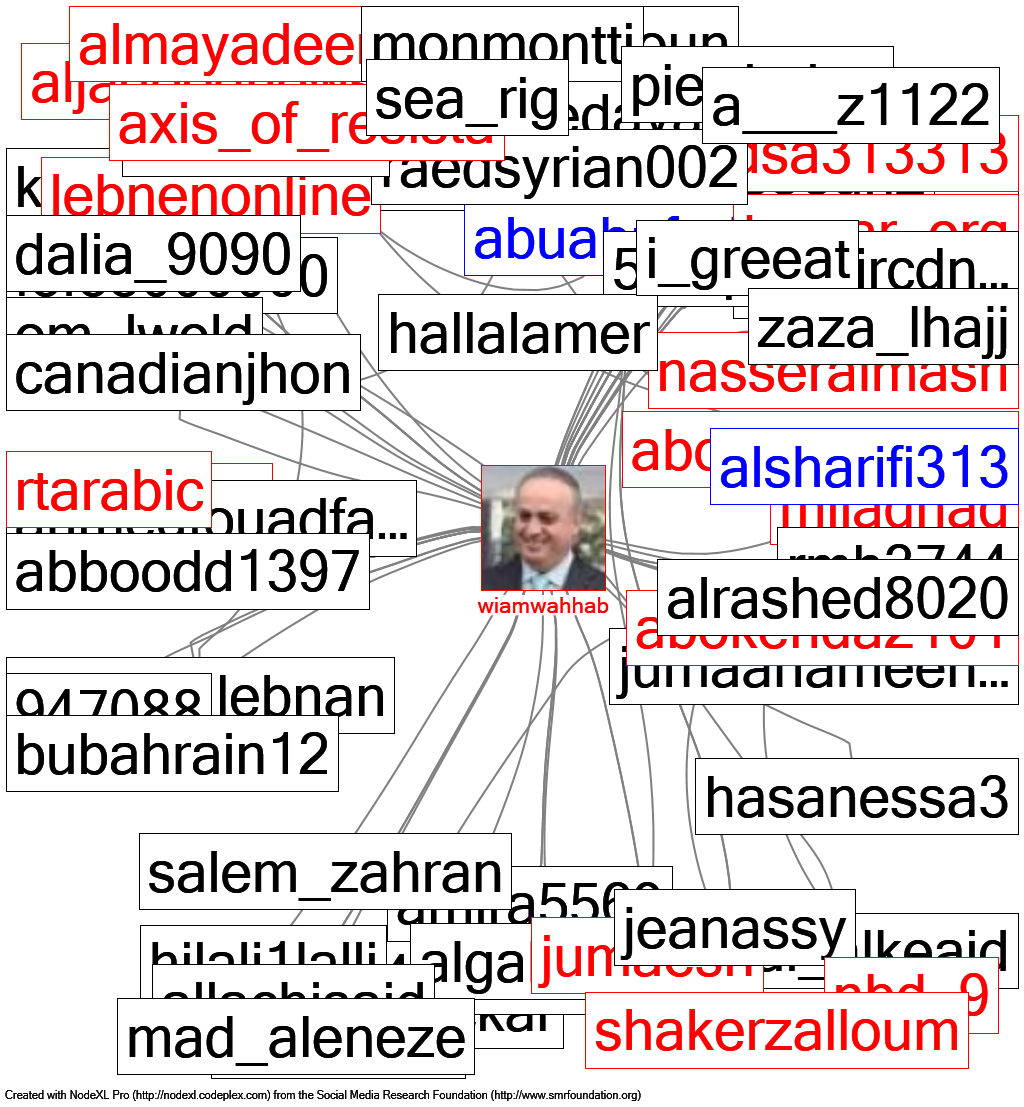 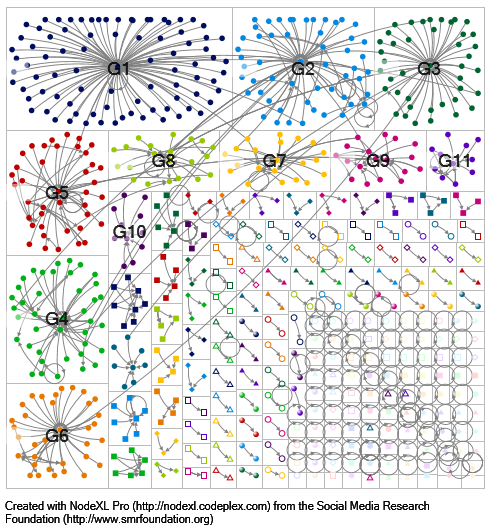 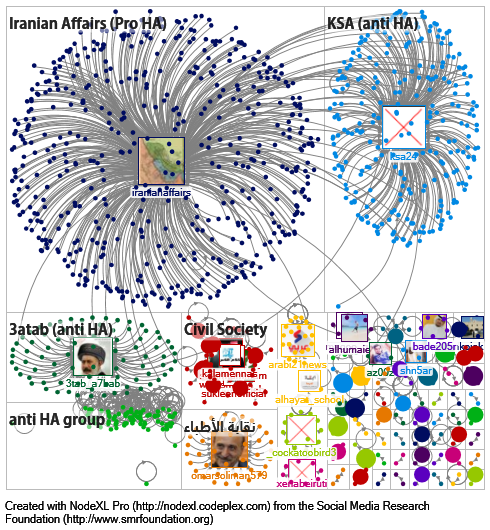 A NodeXL example that shows the difference between Betweenness Centrality (at the center of the graph. Has control over the flow of information), Closeness Centrality (closeness to all conversations) and Eigenvector + Page Rank Centrality (the centrality of the people I’m connected to matters) 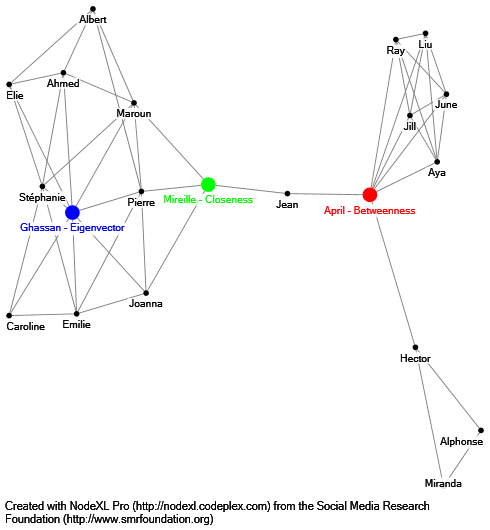